This article is a specific analysis of the invention patent.

Summary of this article
The invention provides an industrial robot low pressure casting machine production equipment, which is composed of an industrial robot end shaft mechanical arm gripping a mold as the main body, equipped with a mold cleaning, a mold assembly platform, an auxiliary robot to load sand cores to the robot, and an automatic feeding system. Fully automatic low-pressure casting center with die-casting molding, demoulding and unloading transportation platform, graphite tank cooling and soaking surface coating. At the same time, it also provides the use of the production equipment, including the steps of installing sand core, low pressure casting, unloading, mold cleaning, cooling dip coating, and resetting to complete low pressure casting. The production equipment realizes automatic production, which changes the previous hydraulic mechanical arm to stop the entire system when a failure occurs, causing serious economic losses to the enterprise. At the same time, the robot mechanical arm takes up little space, has high production efficiency, and is convenient for large-scale production.

Background technique
The metal casting method refers to casting based on traditional sand mold casting using recycled materials to make molds. Usually called permanent mold casting, that is, the mold can be reused thousands of times. Because of the advantages of metal mold casting, castings with complex shapes, various large, medium and small specifications, and multiple cavities can be poured, and are widely used in special castings. Metal mold casting can be divided into two basic methods of gravity casting and low pressure casting. Gravity casting refers to a method in which liquid metal realizes castings by its own gravity. Low pressure casting refers to a method in which liquid metal is cast under external force. The main difference between gravity casting and low pressure casting is that the latter pours the metal liquid into the mold steadily by computer control, avoids the interference of human factors, and effectively guarantees the quality of the product, which is the future development direction of special casting. The existing low pressure casting machine is composed of a huge set of mechanical transmission and hydraulic transmission systems. Its technological process is that the mechanical arm controls the mold opening and closing → preheating the mold → dip-coating graphite paint → install the sand core → the machine moves to the electric furnace Type → pressure holding → unloading → dip-coating graphite paint to complete a production cycle. In the actual production process, due to the use of a mechanical transmission system, often due to damage to a component in the system, affecting the entire system and causing production shutdown, which seriously affects the production schedule and causes huge losses to the enterprise. Large, with high equipment maintenance rate and low production efficiency, it can no longer meet the needs of modern production. 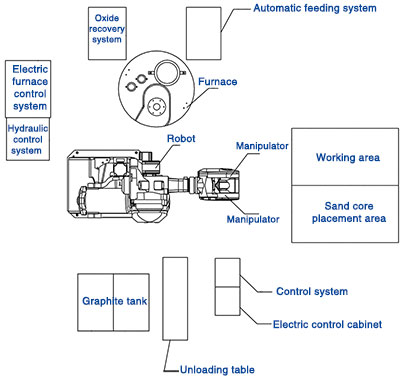 An industrial robot low pressure casting production equipment, including the following equipment
1. A robot with a manipulator holding a mold at the front of the robotic arm and a sand core placement area that can be used in conjunction with the robot’s mechanical arm to install the sand core at the front of the robotic arm.
Remarks: The robot manipulator is controlled by a computer control system. The computer control system includes an electric control cabinet that controls the movement and elevation of the robot manipulator and a control system that controls the movement of the front end of the manipulator.
2. Electric furnace for low pressure casting
Remarks: The electric furnace is controlled by the electric furnace control system and hydraulic control system. There is an automatic feeding system and an oxide recovery system inside the furnace.
3. Unloading table for placing castings and graphite trough for dip coating robot arm front mold
Remarks: The graphite tank includes two graphite tanks for the left and right molds of the front end of the dip-coating robot arm.
4. Clean the front-end mold of the robotic arm and the auxiliary robot that installs sand cores for the mold
Remarks: The mold at the front of the robot arm includes two molds that can be opened and closed
In addition, the distribution of the industrial robot low-pressure casting production equipment is that the sand core placement area, electric furnace, unloading table, and graphite tank are distributed around the robot.

A method for using industrial robot low pressure casting machine production equipment includes the following steps
a. Install the sand core, put the sand core placed in the sand core placement area on the mold at the front of the robot arm, and close the mold;
b. The mold after low-pressure casting is turned to a horizontal position, and at the same time, the mechanical arm is raised and moved to the top of the electric furnace, and the filling is lowered;
C. After unloading and forming, the mechanical arm moves to the unloading table, the mold opens the mold to eject the material, and the casting is ejected onto the unloading table, and the casting is transferred along with the unloading table;
d. Clean the mold once every 20-30 molds produced;
e. The mechanical arm after cooling, dip coating and unloading is moved to the top of the graphite tank, and the two molds after the mold opening are reversed respectively and the mechanical arm descends to the graphite tank to dip the graphite;
f. After resetting and soaking, the mechanical arm moves to the position where the sand core is placed, and at the same time the mold is turned to the vertical position, and the above steps are repeated.
Before stepping the front mold of the robot arm should be cleaned, preheated and dip-coated with graphite. Step a and step d is performed by an auxiliary robot.

Delin Machinery is a well-known Chinese foundry machinery manufacturer, which can provide quotation and export of casting machines to various countries. You can click here: low pressure casting machine to view more details of our casting machine products. If you want to know more details like are we manufacturers? machine function? support video and more pictures? price list? how to buy? Welcome to Call / WhatsApp or send us Email about any question on the machine, please contact us >>>Tel / WhatsApp / WeChat: +86 13960339790, Email: salse16@chinamakeco.com