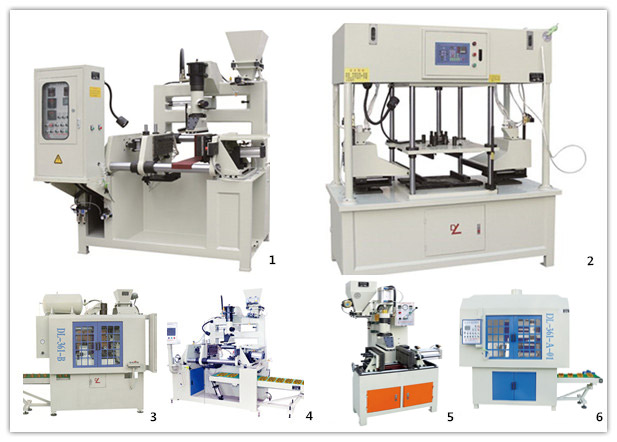 The pneumatic system of core shooting machine runs through the entire workflow, including four parts: the table is raised and the core box is clamped, sand shot, the worktable is lowered, and sand is added.

A pneumatic system of core shooting machine part one: Table rise and core box clamping
The hollow core box is sent to the top of the lifting cylinder along with the worktable and presses the travel switch so that the electromagnet is energized, and the electromagnetic reversing valve is reversing.
The airflow through the electromagnetic directional valve is divided into three ways:
① The first way enters the lower cavity of the gate seal ring through the quick exhaust valve to improve the sealing performance of the seal ring;
② The second way enters the jacking cylinder through the quick exhaust valve, raises the worktable, presses the core box under the sand-blasting head, and presses the core box when the piston in the jacking cylinder rises to the apex;
③ When the air pressure in the pipeline rises to 0.5MPa, the one-way sequence valve opens, allowing the third airflow to enter the clamping cylinder to clamp the core box horizontally.

A pneumatic system of core shooting machine part two: Sandblasting
When the air pressure in the clamping cylinder is greater than 0.5MPa, the pressure relay is pressed, the electromagnet is energized, the electromagnetic reversing valve is reversed, the exhaust valve is closed, and the upper cavity of the annular film quick shot sand valve is exhausted.
At this time, the compressed air in the air storage bag will lift the film of the quicksand injection valve, so that the compressed air of the air storage bag quickly enters the sand shooting cylinder for sand shooting. The length of the shot time is controlled by the time relay.
After the sandblasting is completed, the electromagnet loses power, the electromagnetic reversing valve is reset, so that the quick sand-blasting valve is closed, and the exhaust valve is opened to eliminate the residual air in the sand-blasting cylinder.

If you want to know more details like are we manufacturers? machine function? support video and more pictures? price list? how to buy? Welcome to Call / WhatsApp or send us Email about any question on the machine, please contact us >>>Tel / WhatsApp / WeChat: +86 13960339790, Email: salse16@chinamakeco.com