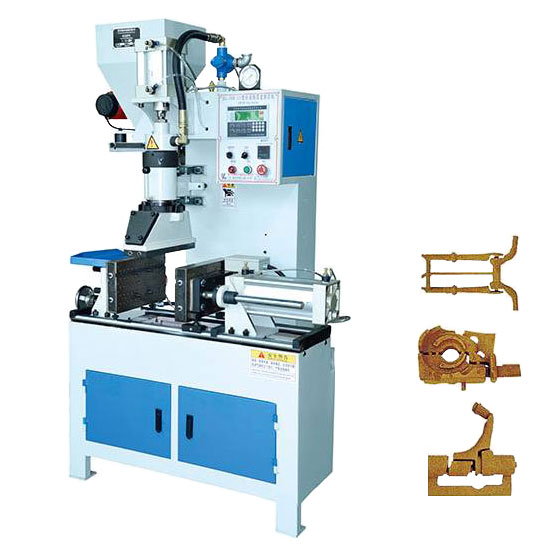 The hot core box method is a method for manufacturing cores in casting production. The sand mixed with foundry sand, thermosetting resin and curing agent are injected into a core box with a heating device and heated to 180-250°C to heat the sand close to the surface of the core box.
Under the action of temperature, the binder can be polycondensed and hardened in a short time to form a core, which does not need to be baked in the oven, which has the advantages of shortening the production cycle.
Moreover, as long as the surface layer of the sand core has a hard shell of 5-10 mm, it can be taken out from the core box. The core sand in the center part is under the action of the residual heat and the heat released by the hardening reaction.
The residual sand can be hardened by itself, which provides a very effective method for the rapid production of medium and small sand cores with high dimensional accuracy (the maximum wall thickness of the sand core is generally 50-75mm). It is especially suitable for large-scale casting production in automobiles, tractor or similar industries.

What are the characteristics of the hot core box core shooting machine making process?
The core is made by the hot core box method. The core sand is prepared by using liquid thermosetting resin and catalyst and filled into the core box heated to a certain temperature. The sand core close to the surface of the core box is heated, and the binder can be polycondensed in a short time. Harden (it only takes a few minutes to cure).
It provides a very effective method for the rapid production of small and medium-sized sand cores with high dimensional accuracy (the core thickness of the sand core is 50-75mm) and is particularly suitable for the production of small and medium-sized sand in the automobile, tractor or similar industries. core. However, the core made by this method has the following disadvantages: high energy consumption; more gas, which makes the operator feel uncomfortable;
Because the core box needs to be heated to a higher temperature and must be made of metal, the manufacturing process is relatively complicated: the thickness of the sand core is limited, especially when the cross-sectional size is abrupt, some cross-sections are prone to excessive hardening, However, the phenomenon of insufficient cross-section hardening leads to a high sand core breakage rate.
If the cross-section of the sand core is too thick, it is designed into blocks and then bonded into a medium and narrow sand core, which is not only conducive to the solidification of the sand core but also saves the original sand and resin.

You may be interested in the Delin Machinery factory showing a hot core box core shooting machine video.

At room temperature, the method of making the sand core quickly hardened in the core box by blowing is called the cold core box method.
The cold core box is an efficient core making process. Compared with the hot core box and shell core, it has the advantages of high efficiency, energy-saving, and good working conditions. It is now widely used in casting production.

The quality and speed of core making in the cold box method are closely related to ambient temperature, humidity, blowing temperature, blowing pressure, and blowing time.
The measures that should be taken to ensure the quality of the sand core are: when the temperature of the original sand is high, the storage time of the sand mixture should be appropriately shortened;
When the temperature of the original sand is low, the sand temperature regulator should be turned on to appropriately increase the sand temperature to ensure the hardening speed of the sand core;
For large sand cores, in order to ensure the hard-penetration type, the blowing pressure and blowing time can be increased appropriately;
Different blowing gas requires different blowing temperature, SO2 at room temperature means the gas does not need to be heated, and triethylamine and methyl formate are liquid at room temperature.
It is easy to condense in the pipeline in winter, and the blowing pipeline needs to take proper heating and heat preservation measures to ensure that the content of triethylamine (methyl formate) in the blowing gas is relatively stable; The triethylamine method and modified silicate sand blowing carbon dioxide/compressed gas composite blowing method are very sensitive to air humidity, and compressed air needs to be dehumidified.

The cold core box core shooter mostly adopts the gas hardening method, that is, after shooting the core with resin sand, the sand core is hardened by gas (triethylamine, S02, C02), which is the basic structure of the core shooter.
Due to the use of the triethylamine cold core box with the above structure, the mold clamping precision is very high, the movement is stable, the production efficiency is high, the cost is saved, the life of the mold is extended, the sand core size is accurate, and the casting scrap rate is reduced.

Hot core box core shooting machine making core: There is an electric heating plate on the hot core box core shooting machine to keep the core box insulated at 200~500℃, since the injected core sand is furan resin sand, which is a thermosetting material, the core can be hardened in about 60 seconds in the core box.
Compared with the traditional core-making method, the core-making of the hot core box eliminates the need to place the core bone and the drying process, high productivity, precise core size, smooth surface and high strength, suitable for manufacturing various complex cores on automobile and tractor castings.

Cold core box core shooting machine making core: It refers to the core box using normal temperature, after the core shooting, the aerosol hardener is used to quickly cure the special resin sand through a chemical reaction. This core-making method requires the use of a special core-shooting machine. The core size produced is accurate and the productivity is high, which is a very promising core-making method.